Copernicus, Galileo, Newton, Einstein, Hubble: The oldest of the natural sciences, the field of astronomy has evolved into a multidisciplinary approach of mathematics, physics, and chemistry to study the cosmos!

In this course, students will be introduced to the basics of astronomy, with an emphasis on analyzing observational data and using the Digital Visualization Theater (DVT) to communicate the results. Topics will include exoplanets, the life cycle of stars, galaxies, cosmology, and the fate of the universe. Students will learn data analysis techniques using astronomical software.

This course will make heavy use of the DVT by the instructors and will culminate in students creating their own short DVT presentation to explain the results of their own explorations. Students will also perform their own observations with the 1.3 m Sarah L. Krizmanich Telescope on the roof of Jordan Hall of Science and take a day trip to Adler Planetarium in Chicago. 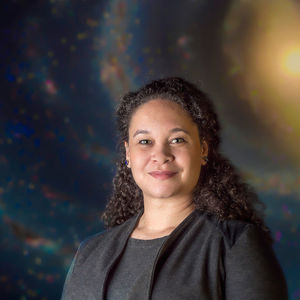 Lara Arielle Phillips, Ph.D. is an Assistant Research Professor of Physics at the University of Notre Dame. As a researcher, she studies the interplay between galaxies and the largest structures in the universe. She has transformed computational tools used in medical physics to peer into the different neighborhoods of the cosmic web, studying filaments, voids, and clusters. She holds a Ph.D. in Astrophysics from Princeton University. As a teacher, she co-created a course on Physics and Theatre, Science Play. Part of the Westville Educational Initiative, she is pioneering the teaching of algebra-based physics in a correctional facility. As Chair of the Outreach Committee of the Department of Physics, her efforts to involve the broader public in science have reached thousands. She is a member and co-producer of the artistic collaboration High Z, a project to create a hybrid installation based on the 2011 Nobel Prize winning discovery of the accelerating universe. 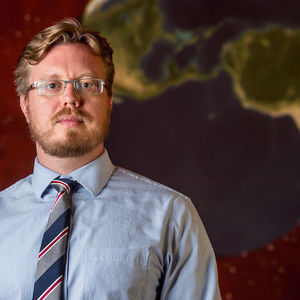 Keith Davis, Ph.D. is the director of the Digital Visualization Theater (DVT) and an Assistant Professional Specialist in the Physics Department at the University of Notre Dame. He designs and presents live full-dome presentations and lectures for University classes and the public in the DVT, and facilitates faculty members' use of the DVT for teaching their classes. Dr. Davis creates educational content for teaching astronomy, physics, anatomy, biology, and chemistry, and works with artists, poets, and musicians in developing live performances designed for digital planetariums. He developed an interest in data visualization during his Ph.D. research at Clemson University, studying the interaction between supernovae explosions and molecular clouds with computer simulations. He serves on the outreach committee for the Physics Department and is interested helping the public understand and see the science in their everyday lives.