When in Rome: Landmarks of the Eternal City

Few cities in the world can boast 28 centuries of such a dense, glorious, turbulent history as Rome can. At the center of western culture and civilization, Rome translated Greek science and philosophy for all the nations and people of the ancient world; from the Greek tradition, Rome inherited the models to give life to its own literature in Latin, as well as those for the fine arts; it created the system of laws that is still at the base of our concept of justice, and developed a political culture that put the law above everybody and everything; it absorbed the rigorous Judean spirituality transfusing it into the new Christian tradition/religion for the ecumenical masses. Rome created the concept of public works, preferring aqueducts, sewers and thermal baths to exaggerated, hyperbolic, self-referential monuments. Most of ancient Roman literature, painting, sculpture and architecture is lost, but enough remains to help us understand why we are what we are today.

This course is an itinerary to six prominent sites and landmarks of Rome through time, from the foundation of the city to the present day: Coliseum, Saint Clemente’s Basilica, Caravaggio paintings, Piazza Navona, Saint Peter’s Basilica, and the neighborhood where the oldest Jewish community outside of Jerusalem still lives today. 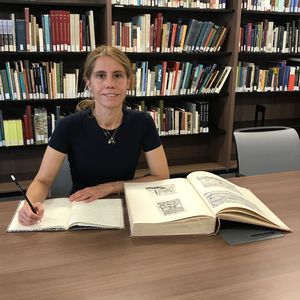 Chiara Sbordoni teaches the Rome Global Gateway core course All roads lead to Rome and Italian courses for the School of Architecture. Her current research focuses on Dante and Rome. She studies, in particular, the presence of Rome - both the physical city and the historical, cultural, and religious idea of Rome - across the whole arc of Dante's literary works.